skip to main | skip to sidebar

The State of Our Psyches: Chaos Makes a Suggestion

Recently, Chaos started thinking about what, in someone else's words, a "sane and sober nation" would do in response to peak oil...not the most drastic, expensive, iffy, or politically inexpedient actions, mind you, but in fact the opposite: the quickest,easiest, cheapest, most innocuous, and least controversial moves the most wasteful nation on earth could make. Chaos' response was this: lower speed limits to 55 mph. Seems like a no-brainer, no? By simply driving slower, the Empire could save probably 5-15% of gasoline usage without further discomfort (estimates are mostly Chaos' semi-wild-ass guesses, backed up by cursory internet research...). In fact, this action has been tried before, back in the energy-constrained 1970s. Yes, yes, people hated to drive slower, but it worked anyway (also saved many lives, but this is not in itself an argument for the implementation) so the effects are already known. In order to further this thought experiment, Chaos posted this suggestion on the premier site for the study of Peak Oil, the Oil Drum (the thread entitled H2Car: Another Blind Alley) and awaited response. Among the most energy-enlightened individuals on the net, quite a lot of resistance emerged to this idea. Posters challenged how much conservation would result, stated that people would not obey the limit, thus leading to more accidents, invoked Jevon's Paradox (more savings would drive the price down, leading to more consumption), and questioned whether in fact such an idea would ever be politically viable since people have such a "visceral reaction" to the previous 55 mph speed limit. To this, Chaos can only say: wow. The levels of denial here in the Matrix are much deeper than
even a slow-crash doomer like Chaos had even suspected. Read the thread and ponder the cacaphony that will surely ensue once the world starts down the slope of declining oil production. It won't be pretty, and it may be ugliest right here in the richest nation on earth. For a fine example of same, check out this article in the paper of record on how residents of the Empire are shrugging off recent gasoline price increases (the comments by the woman at the end are particularly striking).
Posted by Chaos at 7:37 AM 2 comments: Links to this post 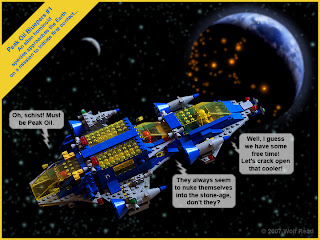 The Rapidly Aging Face of China

An interesting article in today's Times emphasizes what astute demographers already know: China's population is projected to begin quickly aging, more than any other "major" nation...this phenomenon will have consequences for this newly industrializing country, specifically finding the resources to care for an enormous population of retirees. (Since everything in China is on a grand scale, the estimated numbers are upwards of 430 million people. It should go without saying that China's pensions system is dysfunctional ("fragmentary" is the term used in the article, sadly without more exposition) and lacks sufficient funding (financial tricks are hinted at), and the peasant tradition of younger people caring for the elderly has fallen by the wayside in the wake of the massive economic expansion that has taken place within the last 20 years, but the demographics does much to explain why the country seems so frantic to "become rich"--there is a limited time before the aging population will begin to consume most of the resources. Perhaps no other country will be more fascinating to observe over the next 20-30 years, Chaos believes, save that of the US.
Posted by Chaos at 8:15 PM No comments: Links to this post

Not many better ways to say this, but the current issue facing the reddest of the red states involves the not-quite-mandatory vaccination of prepubescent girls for HPV, an STD which causes cervical cancer and is responsible for several hundred thousand deaths worldwide. A recently developed vacccine promises to reduce said deaths, and in a rare burst of enlightenment, the governor of Texas issued an order promulgating the vaccine for girls.(The order is frequently described as "mandatory," but in fact is nothing of the sort: parents may opt out of its administration). A firestorm of controversy ensued. A most thoughtful, if political, acquaintance of Chaos' raised what seemed to be legitimate questions about the vaccine's efficacy and the troubling relationship between the governor and the big pharma company promoting it. This position may be valid, and certainly should be the basis for a reasoned debate, but kindly recall what state Chaos is speaking of...in point of fact, the debate will proceed solely on the absurd fundamentalist position that the administration of the vaccine will lead to more promiscuity (Chaos can only shake his head as these words appear on the screen...). Chaos likes following this issue because of its purity: the stark face of how religion promotes death by attempting to regulate others' sexual behavior. Chaos' prediction: no vaccine for Texas girls, and some will die because of it.
Posted by Chaos at 7:32 AM 2 comments: Links to this post

A Thought From Matt Savinar: Synchronicity

"I think an individual's geographic location will be responsible for 80% plus of how this [Peak Oil]plays out for them." --recent comment by Savinar on The Oil Drum

This gentleman, a published author and licensed attorney, is the owner/operator of the website After The Oil Crash. Readers are invited to peruse the site of a true doomer, but isn't it interesting that a similar conclusion has been reached, apparently independently, by both he and Chaos regarding what individuals can do in response to the looming "human induced extinction event?"
Posted by Chaos at 3:22 PM No comments: Links to this post

From the Oracle of Omaha: Words of Warning

Chaos has previously featured the folksy, yet ever so sagacious remarks of the greatest stockpicker in the land, Warren Buffett, through his annual shareholders letter, and this year, the Great One has more concerns about the spiraling foreign account deficits the Empire is currently producing:(pdf document in link)

"our citizens [in the future] will also be forced every year to ship a significant portion of their current production abroad merely to service the cost of our huge debtor position. It won't be pleasant to work part of each day to pay for the over-consumption of your ancestors. I believe that at some point in the future U.S. workers and voters will find this annual 'tribute' so onerous that there will be a severe political backlash. How this will play out in markets is impossible to predict--but to expect a 'soft landing' seems like wishful thinking."

Yet another unwitting reason to consider a more fiscally responsible nation to reside in...
Posted by Chaos at 7:50 AM No comments: Links to this post

Still Another View of Escape From Empire

As Chaos has noted previously, we greatly admire our friend Joe Bageant for his searing and very funny writing about life in the ever-so-slowly collapsing Empire. Chaos has even greater respect for the man since he decided to "walk the walk" and exit the Empire for a hut in Belize (leaving behind his unaware spouse, who apparently could not break free of the Matrix...). Here's Joe's first take and musings on life in a different place, far away from the corrosive "values" of the Empire. If for nothing else, be entertained today, readers. (For an additional interesting contrast between Germany and the US, look up posts by "Expat" on The Oil Drum).
Posted by Chaos at 8:23 AM No comments: Links to this post

The Most Mendacious Oil Article Ever?

Here is Reason #23 why the world, and the US in particular, will continue to drive merrily off the cliff of Peak Oil: articles such as the one appearing in the nation's paper of record are at best irresponsible and careless with the truth, and at worst (in the opinion of some who see conspiracies more often than Chaos) are a manifestation of the MSM, housing, oil and motor vehicle industries' desire to continue business as usual (the "Iron Triangle," according to one wag). Chaos would not project quite that far, noting that some excellent articles on the subject have in fact appeared in the MSM in the past year, but still cannot help but observe that a granite wall of denial surrounds most coverage of oil issues (of course, enabled by the US public, which desires to keep its easy motoring lifestyle no matter what...) To read the article debunked, go here (scroll down to seventh comment or so...).
Posted by Chaos at 8:03 AM No comments: Links to this post

Our Final Visit To The Hill Of Shame 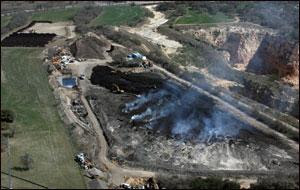 The former Mountain of Shame, now shrunk to a mere hill, has contaminated five wells of vital Edwards aquifer water, as efforts to extinguish it and "make it go away" are perhaps finally bearing fruit (albeit at a huge cost). Unfortunately, the ignorance, apathy and indifference to environmental destruction symbolized by this monolith will remain embedded within the local population, driving its monster trucks and SUVs, growing ever more obese by gorging on cheap and empty corn-fed fast food, happily and unconsciously shopping for more cheap junk to bring meaning into their empty lives, or taking refuge in the cult of celebrity worship or primitive religious rites. This, as news comes that Saudi Arabia's oil production declined 8% last year. Read the link, ponder, and then take a drive out in traffic today, readers: experience the Matrix at its most powerful.
Posted by Chaos at 7:44 AM No comments: Links to this post

What Is Chaos Referring to?